A Change in Social Media Plans...

Hey everybody. I know it's been a little while since the site had any activity, but I just wanted to update everyone on SL's social media presence.

For the entirety of the site's existence, SL has had a large presence on Google+, and that has been mainly it. (Much to the chagrin of some.)

Up until February, we also enlisted Google Friend Connect, a service that allowed people with Twitter, AOL, and various other services to follow the site as well. However, Friend Connect... no longer exists. Well, it does, per say, but it only allows you to connect with Google+... which you can already do through the embedded Google+ tab on the blog.

So here's the role call for SHARD Labs: If you previously used Friend Connect to follow the site, PLEASE switch over and click "Follow" on the Google+ tab. 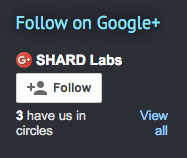 If you don't have a Google+ account or haven't bothered to follow us in the past... well, do it or suffer the consequences. Just kidding. Maybe.