Today's review is a bit of a departure from protocol; I'm actually previewing... a laser tag system? The folks at RezaNinja were nice enough to ship me a review set across the sea (and remarkably quick, at that).

Many thanks to those guys, who you can check out at the links below:

What is RezaNinja? The company's slogan is "Reza mean laser!" I'll take their word for it. But on a more serious note, this business specializes in cosplay, gaming, and laser tag. The lattermost of which I am reviewing today.

They shipped me a review set remarkably fast; it took less than a week for the shipment to make it overseas from Hong Kong to my house. So kudos to them there.

If you managed to see them at the New York Toy Fair this year, than you probably don't even need to read this review. But since you probably didn't, (I sure wasn't going) keep reading after the break!

The RezaNinja laser tag system is a pretty nice-looking set of gear. And boy, is there a lot of it. 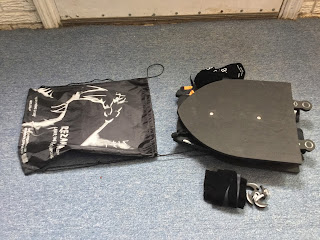 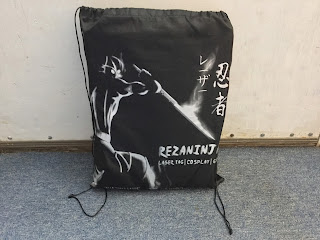 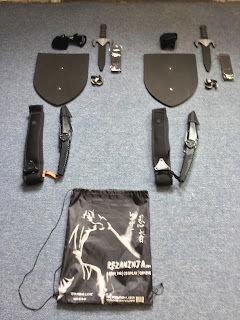 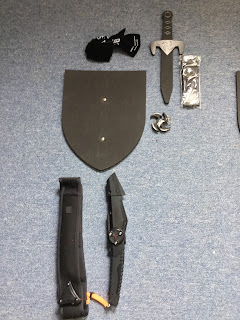 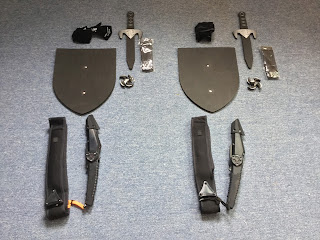 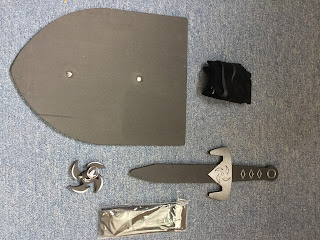 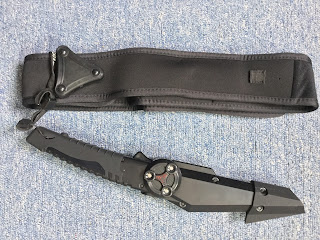 ...That's a lot of stuff. But it's all very nice. The foam accessories don't really do much for the actual game, unless you buy the impact vest which measures physical hits as well. But it's all great for cosplay!

Let's get into the meat and potatoes of our pie now, however: the RezaSword and Vest. This is what you'll be using to actually play the laser tag game.

The RezaSword is a pretty nice looking piece of equipment. Some Kickstarters I review send products that are still in their prototype stages, and therefore, not as nice or streamlined, but RezaNinja has been working on their system for a while now. 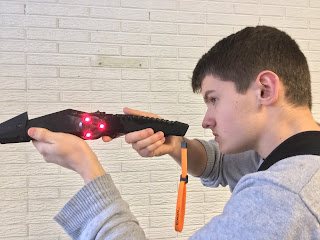 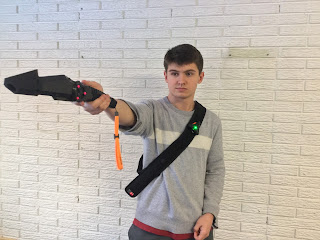 It reminds me a bit of a Wii remote. The device is slightly curved, with a trigger on one side, and fits well enough in your hand to work in either sword or gun mode.
The handgrip is covered by a matte black rubber cover, also a la Wiimote. This covers the battery cover as well as the mode-changing button at one end.

On the front, you'll see a large angled piece of rubber with a hole in the middle. This is the laser part. (This is starting to sound wierd.)

The their are six LEDs on the gun, three on each side, and these blink repeatedly at you as play the game. There's also a rumble motor inside that vibrates whenever you're "hit."
This is all very nice, but it brings me to my first complaint: the sound.

When you first insert the AAA batteries into the remote (WARNING: You're gonna need 12 of these puppies to power the entire set) and hit the switch, the sound system kicks on with some jammin' rock tunes. Nice! Aim and pull the trigger, and you'll here the semi-loud "Pew!" "Pew!" as it fires on the opponent. But switch into sword mode, and you'll be greeted with the EAR-SPLITTING sound of metallic sword blades smashing into each other. And we're talking deafening here. It may be a little better outside, (I haven't tested it outdoors) but then again, your neighbors might just call the cops.

Otherwise, the RezaSword is very nice! For all of its sounds and blinkeys, the pair managed their battery life quite nicely. You'll want some rechargeable batteries for them to help ease your wallet.

What fun is a laser tag game without a point system? That's what the belt accomplishes with a (somewhat) easy way of keeping track of points.

The belt isn't as nice as the gun, but still accomplished its job pretty well. It has one triangular sensor on the shoulder-region of the fabric, and a point-counter screen on the back strap. This counter goes up with each hit you receive; as opposed to most systems where it shows your points for how much damage you given.

This is where the electronics to the system get a little screwy: To "sync" the belt to your sword, you must point the gun at the belt's sensor and toggle a little plastic switch on the sensor back and forth. This (may) work, at which point the belts' embedded LEDs switch from solid blue to a pulsing green. If it fails, the screen reads: ERROR and explodes.

Okay, so it doesn't explode. But hooking the different peripherals can be quite a pain, especially if you don't have someone else helping.

Overall, the system is pretty fun. You'll want a pretty large area to play in with (preferably) some obsticals to hide behind, but it can be fun in a smaller area, too.

RezaNinja has also announced that they're working on an augumented-reality add-on to the system as well, which will allow users to "unleash secret powers" and fire digital dragons and other things at each other with the help of AR headsets. All this and more they're working on and hope to fund in their Kickstarter. Check it out below!

Well, that's all for this week. Be sure to check out the SHARD Labs GoFundMe...

...and if you like what you've read, consider donating a buck or two. (Or five hundred, if you're Bill Gates. I know you're reading this, man.)

Otherwise, keep your eyes peeled for the next review. Have a great week!

Today's the day, folks! After much contemplation, and several days of getting prepared, the SHARD Labs GoFundMe is official open!

Click the logo to visit the page! We've worked long and hard on this project and hope you all appreciate the campaign. Please consider donating to help us upgrade the site, purchase extra equipment, and most importantly, bring you all more content. Plus, there are several reward levels for donators, depending on how generous you are with your money. (hee hee)

We thank GoFundMe and all our readers for helping and supporting SHARD Labs.