What's up, everybody? Carter here with another review form the labs... this time, a neato little system that converts your touch into a digital controller, regardless of the object. (Mostly.) It was highly successful on Kickstarter, raising almost $200,000. Intrigued? The review starts below.

Many thanks to the wonderful folks out of Joylabz who shipped me the device! A big thanks to them. You can find them at their website: 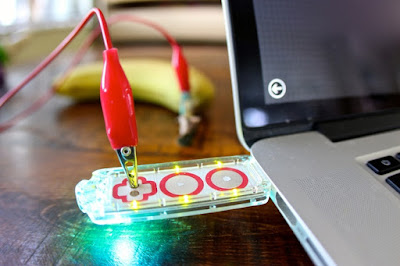 What is Makey Makey? And more specifically, the Makey Makey GO? To quote the Kickstarter, it's an invention kit on your keychain. And they don't lie; this stuff is pretty fantastic. Using alligator clips that hook the device up to any object that conducts electricity, it digitizes your touch and sends the signal back to your computer as either a mouse or spacebar click. Perfect for one-button games, menial tasks that you want to make more fun, or, you know, bongo-drum jello.

The folks at Joylabz were very nice to ship me a review unit, and incredibly fast to do so as well. My kit came in just a couple days and included:
-1x Makey Makey GO Device
-1x Instruction Manual
-1x Booster Kit

The device itself comes with the plug-and-play dongle, as well as an alligator clip for hooking it up. The booster kit, which they graciously included as well, includes a bunch of conductive tape, cloth, wires, and jumper cables to help you set up an epic project with your device.

The Makey Makey GO may be small, but it's a cool device. Roughly the same size as your standard USB flash drive, it fits into your pocket easily. But why would you put it in your pocket when you can flaunt it to the world!?! You can easily put it on a keychain or a cord and wear it around your neck.

The device is simple enough to operate: There are three capacitative buttons running along one side of the device. Well, two are buttons; one has a divot in it for you to clamp the alligator clip on.

The other two buttons control the reset, type of button press, and sensitivity mode. Reset allows you to, well, reset the device should you attach a new object. Button type lets you cycle between being detected as a mouse press or spacebar press. And sensitivity lets you increase the touch level dramatically. On very conductive surfaces, you can even have it detect your presence when your hand isn't even touching the object! (It still has to be close.)

The alligator clips have firm grips and are easy to use. They have a soft plastic casing on the outside to help grip the clamp and lessen a freak-out from the system's touch detection.
The setup for a computer is super easy. Just plug it in and you're good to go! The computer recognizes it similar to how it would a mouse or keyboard. Plus, the rainbow LEDs on the device light up in a cool light show when you plug it in.

The Booster Kit is an expansion pack for your Go. Think DLC for the real world. You get a BUNCH of nice, conductive materials that you can hook up to your Makey Makey GO and have it do tricks. Like laying down conductive tape on a slackline, hooking it up to a tablet, and seeing how long you last. It's a ton of fun.

This area's a bit trickier to cover, since the Makey Makey Go works to varying degrees with a TON of software. If the program accepts mouse or spacebar input (Which, if it doesn't accept either, is odd.) the GO will work. The Makey Makey site has a ton of demo Scratch applications that you can use right in your browser to test out how the GO works. (I was even able to download some of the Scratch apps straight to my computer and run them offline with the Scratch Offline Editor.

I've found that the GO device generally has more application as a spacebar input than a mouse clicker. Because while it will input left-clicks, you can't use it to move the mouse around the screen. But if you want to use a big red button of doom to make those Amazon One-Click Purchases, be my guest.

Also, nearly every website out there with Flash games has some endless runners that'll work quite well. The Flappy Bird Scratch demo I tried, however, was incredibly hard. I barely made it past one pipe! But maybe I'm just not hipster enough to play that game.

But there a definitely a lot of applications for this device. And with its portability, you can take it nearly anywhere that you, a laptop, tablet, or smartphone (with adapter) can go.

And that's that, in a nutshell! If you want to learn more, or find out when and where you can buy one of these bad boys for yourself, head on over to the Store Page and tell 'em Carter sent you.

Until I write again...